Could You Live Without Google for a Week?

Google, in little over a decade, has become the most pervasive company on the Internet. They freely give away their best products and we have correspondingly embraced them.

Off the top of my head, here’s a quick list of the Google products I frequently use (and you probably do too):

These are just the ones I personally use; more of you probably use things like Android, Buzz, or Latitude, not to mention all the different Google services hidden in the code of millions of websites across the Internet. The full list of Google products is downright scary (click here if you dare to take a look).

So What’s the Problem?

Other than potentially Facebook, there is no company we trust with more of our personal data. As benevolent as Google may be (their unofficial motto is “don’t be evil“), they are still in the business of harvesting data and finding ways to profit from it.

Even if you don’t trust Google with your mail or calendar, many of their services (Analytics, AdSense, FeedBurner, etc.) are embedded on websites you visit. If you want to view web videos, Google-owned YouTube has become the de facto standard.

Today, it is almost downright impossible to surf the Internet without encountering Google. The privacy implications are astounding. Heck, Google CEO Eric Schmidt has even suggested everyone be entitled to a name change to avoid the all-seeing eye of Google.

Google isn’t content on resting its laurels on its web services, either…they’re rapidly expanding into operating systems. Google’s Chrome OS, a browser-based operating system, is looming. It will launch on netbooks, but how long until it is refined enough to run on full laptops and tablets?

Google’s Android operating system for smartphones is also seeing incredible adoption; it’s gone from an iPhone also-ran to doing more than 200,000 activations every day (the iPhone 4 sold 1.7 million units in the 3 frenzied days following its launch; Google’s regular pace is now matching that in little over a week year-round).

Today, I face a dilemma: I willingly use and love many Google services but I am increasingly concerned about the privacy implications. So what am I going to do about it? 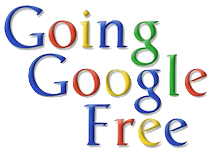 Very simple; I’m going to try and go for an entire week without using a single Google service.

My goal isn’t to make this permanent; I think Google provides many great best-of-breed services. What I do hope to do is raise awareness of the pervasiveness of Google and identify some good (and hopefully a few better) alternatives to many Google products.

Effective immediately, I’m blocking all Google services from my computer (with one small caveat; more details tomorrow!). If I click through to a Google-owned website (for instance, shortened YouTube links on Twitter), I will not view the content. I will not use programs that exclusively sync with Google services (for example, desktop RSS readers that sync with Google Reader).

Will this be hard? Honestly, I have no idea. Google has been a major part of my life ever since I started using a computer. Using the Internet without Google is as incredulous an idea to me as using a computer without Internet access.

Could You Go #GoogleFree too?

Think I’m crazy? Think you could you do it too, even if only for a day? Join me on Twitter (I’m @rkudeshi), where I’ll be using the hashtag #GoogleFree to chronicle my journey!

How do you think I will do? Any suggestions on Google alternatives? Chime in below in the comments and let me know what you think about my crazy idea!