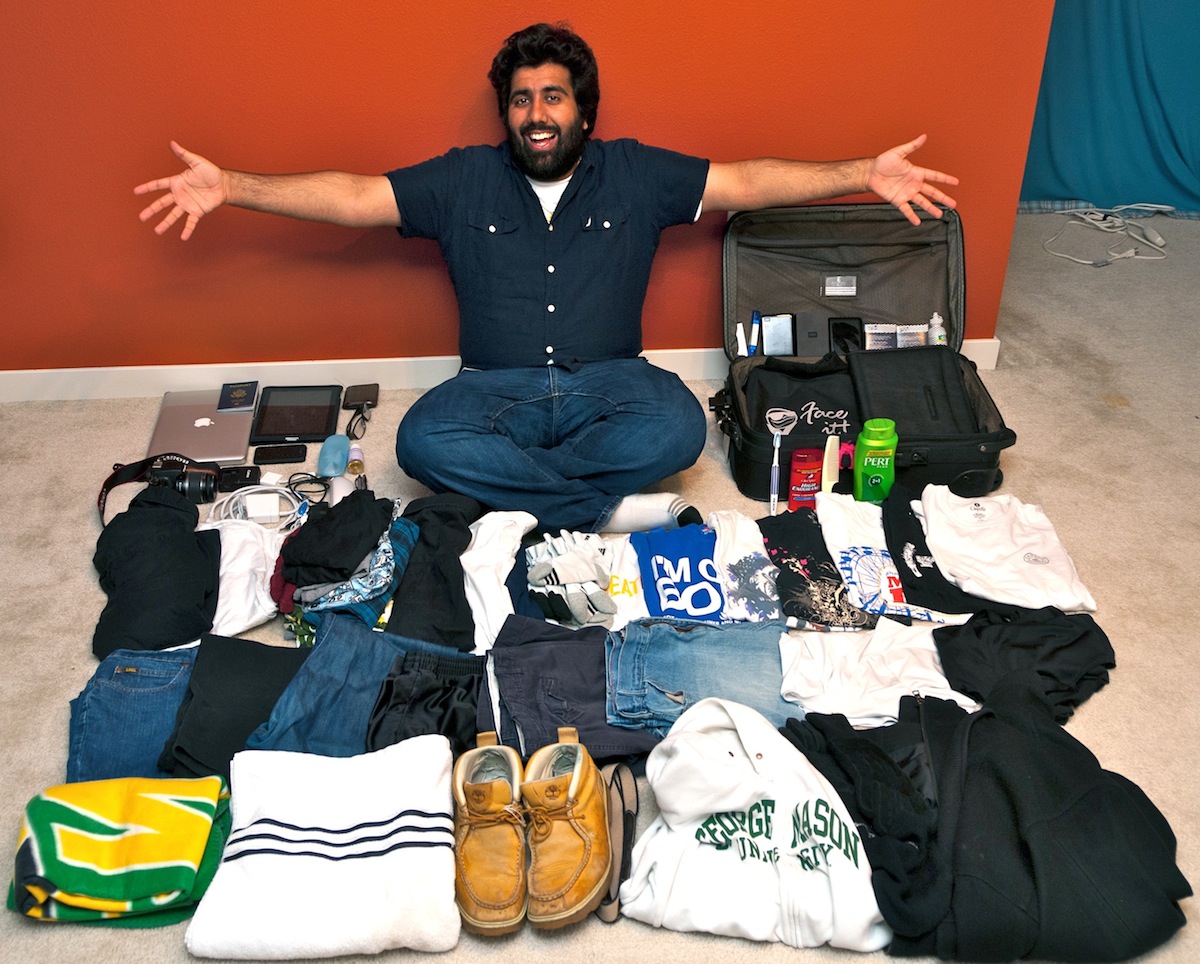 On the plane, I have a very small knapsack and one overstuffed carry-on bag. I didn’t check in any luggage, so those are actually the only bags that I have with me.

Between those 2 bags and the things I have on my person, I’m only carrying 75 items.

That’s pretty much all I brought with me 2 months ago, too. And the crazy thing is that I actually didn’t even need all that.

The fact of the matter is that I have been happily living with fewer things than I used to cram in my car trunk alone.

Sound impossible? Perhaps to some people. But ever since I started pursuing a clutter-free life in early 2009, this has actually been a dream of mine: needing so few things to live and work that I could pack everything into one bag and travel wherever my heart desired.

I’m not the only one crazy enough to attempt this: in 2008, Dave Bruno started the 100 items challenge. The idea to permanently live with so few items was radical at the time, but many minimalist bloggers have since followed the same trailblazing path in recent years.

But while I’ve been slowly decluttering ever since I discovered Unclutterer and Zen Habits, I knew I needed to do something radical to really jump-start myself on the path to minimalism. So last year, I called up my good friend Dan Tran and asked him if he wanted some company this year. He graciously welcomed me and so I found myself on a plane to Seattle only days after graduating from college.

Now, I feel like my decision has been vindicated. I haven’t been at a loss for anything while staying in Seattle; in fact, I actually put a bunch of stuff I wasn’t using back in my bag after only a week.

But before I get ahead of myself, let me share with you exactly which 75 things I’ve been living with:

Too Much: Travel Light or Pack Everything?

As we were counting up everything, Dan actually remarked, “that’s a lot of stuff.” That’s an almost crazy notion, considering I was able to pack it all into a carry-on bag and knapsack, not to mention the fact that most people live with thousands upon thousands of items (go ahead and count your stuff, I’ll wait!).

But even crazier is that I actually agree with him—I definitely did over-pack. This was the first time I’d lived away from my old home for more than a week and I wasn’t entirely sure of what I’d need (a screwdriver? a media remote?!).

All of the “extra” stuff I packed—the things I never touched or packed away after only a few days—fall into 2 general categories:

1. Too Many Clothes: Let’s face it, I packed a lot of clothes. Interestingly, when I was originally packing for the trip, I had even more clothes but they didn’t fit into my carry-on bag (12 t-shirts, more button-down shirts, etc.). When I started taking stuff out of my bag at midnight the night before my 8am flight, I was worried it might not leave me with enough. On the contrary, I found myself actually taking clothes out of my weekly rotation. For example, I packed away 2 of the t-shirts and 2 of the long-sleeve button down shirts because I only wore them to delay doing the laundry each week; by putting them away, I forced myself to adhere to a regular laundry schedule and wear only the clothes I felt most confident in (most people wear 20% of their clothes 80% of the time, an idea derived from the Pareto principle).

2. Too Many “What If” Things: Despite my best intentions, I fell into the trap of packing things that I really wouldn’t need regularly; instead, I should have remembered the “Buy It There” philosophy, which advocates buying cheap “what if” items only if and when you actually need something, not weighing down your bag with everything from the get-go. For example, I really didn’t need the gloves, beanie hat, screwdriver, remote, blanket,3 or 2 extra hard drives,4 just to name a few.

(By packing even lighter, I could have hopefully avoided stuffing my bag to the point of bursting!)

However, in practice with BIT, I did buy some stuff in Seattle too: a pair of Ex Officio travel underwear, a 2 oz. bottle of Dr. Bronner’s Magic Soap, deodorant, shampoo, soap, toothpaste, and 2 new pairs of glasses (purchased online!). As you can see though, most of the stuff I bought was consumable products, which helps keep my material objects to a minimum (as they will be used, replenished, or replaced over time).

Could You Live with 100 Things…or Less?

If my experience is any guide, it is both surprisingly difficult and easy to maintain such a lifestyle with a minimal number of possessions. You should and will expend significant cognitive effort figuring out exactly what things you need to live and work. However, once you decide and actually limit yourself, I truly believe you will not be at a loss for anything. I honestly had a blast living with so little and would not trade it for anything.

What about you? How many possessions do you need to live your ideal life?